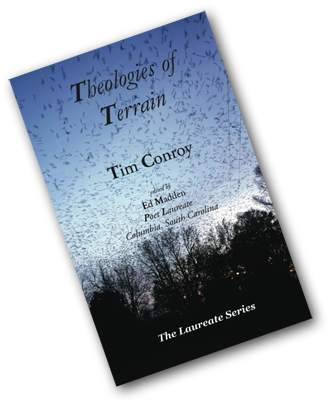 Tim Conroy, South Carolina poet and brother of beloved novelist and longtime Lowcountry resident Pat Conroy, will explore the power of writing to help us withstand and ultimately understand family conflict. In his presentation, “Family Secrets/Family Truths: Writing out of the Shadow of the Great Santini,” Tim will talk about how Pat pieced together family secrets into healing family truths through the power of writing, with focus on the tour de force autobiographical novel, The Great Santini, about an abusive Marine fighter-pilot father’s reign of terror over his family. He will recount his own version of Conroy family secrets and how he now uses poetry as a means for expressing his vision of the family truths.

Interview composed and conducted by Clifford Brooks published in the Blue
Mountain Review appeared in the 2017 Summer Issue # 8. Turn to page 99 for a
great read.
https://issuu.com/southernmusepublishers/docs/issue_8

Punch on 153 and take a listen to Henry McCarthy’s homespun radio show, Poets
and Writers. Henry interviewed me from his car at the 2017 Pat Conroy Literary
Festival in Beaufort, South Carolina on October 21, 2017. Also, take a listen to some
of his other great shows too.
https://archive.org/details/PoetsAndWriters/SteveJett.mp3

JULY 17, 2017
A Public Conversation with Cassandra King About Pat Conroy
(Originally broadcast 03/17/17) – In the Fall of 2016, the Newberry Opera House, in
partnership with the Pat Conroy Literary Center, presented a special night in honor
of the late author, Pat Conroy. The evening featured Conroy&#39;s widow and fellow
novelist Cassandra King interviewed by Walter Edgar, and was presented in benefit
of the Pat Conroy Literary Center. Note: The last eight minutes I read a remarkable
letter written by my brother Pat during the summer of his first year of teaching at
Beaufort High School. If you have time, listen to the entire broadcast.
http://www.npr.org/podcasts/381444475/walter-edgar-s-journal

There is a “Theology of Terrain” video, produced and directed by Drew Baron, as
part of Kathleen Robbins’ installation of “Descent: Mississippi Delta photographs
1999–2014” at the Columbia Museum of Art. (2016).
https://www.columbiamuseum.org/cma_stories/theology-terrain-tim-conroy

The Great Yes
Below is a link to a interview conducted and written by Margaret Evans. The article appeared
in print and online on October 17, 2017. Margaret is an Editor for the LowCountry Weekly.
http://www.lcweekly.com/books/4868-the-great-yes

Dr. Kasie Whitener interviewed me on 100.7 for her patron funded talk show called, Writeon SC.
It was broadcasted on The Point 100.7 FM on March 16, 2019. It was an honor to be on her show. Her
radio show highlights writers and poets across South Carolina. Kasie is a hell of a writer and forward-
thinking entrepreneur. It was a pure joy to chat with her. Give this show a listen.
https://drive.google.com/file/d/1gwNG1FwO8z0vqhv-69mjbkZ1qyaADzdV/view?usp=sharing 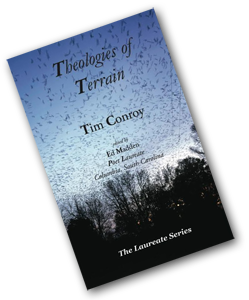 “In this dwelling of scars/the history of dirt is blood,” Tim Conroy tells us in this
excellent debut. There is sadness in these poems, vivid renderings of childhood abuse and of lives that ended too soon, but the beauty of the natural world is also acknowledged, as is the realization that memory offers consolation as well as sorrow, all of which leads to the poet’s hard-earned affirmation that “love has saved me.” Bravo! – Ron Rash